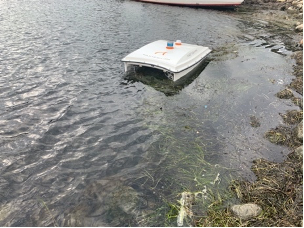 The WasteShark has been tested at Fakse Ladeplads in South Zealand at two locations; inside the port and at the corresponding beach. The temperature was between 10-12 degrees, with wind between from 6-8 m/s from south/southwest.

Test at the beach. At Fakse Ladeplads, a lot of algae was found at the beach and in the water around the structures. There is major odor nuisance, caused by algae which is mostly eel grass and beach wrack. Initially the drone was tested using manual control at the beach site. Although we did manage to sail a short tour, the test at the beach had to be aborted after approximate 5 minutes as the wind and current was too strong for the WasteShark to handle. Also, algae got stock in the propellers, leaving the drone with much less thrust. No algae were successfully collected in this test.

Test in the port. After the initial test at the beach, the drone was transport to the nearby port. The port is full of debris, which seems to be mostly eelgrass. In this test, we sailed 3 rounds in the harbor with the drone using remote control. The total sailing time was approximate 2 hours. The Waste Shark proved successful in picking up seaweed from the harbor area, but in many cases also loses the seaweed again. This in particular happens when thee drones sails in reverse, which can be necessary for navigation purposes. In general, it turns out the be fairly difficult to do the navigation tasks related for picking up the algae due to wind and current.